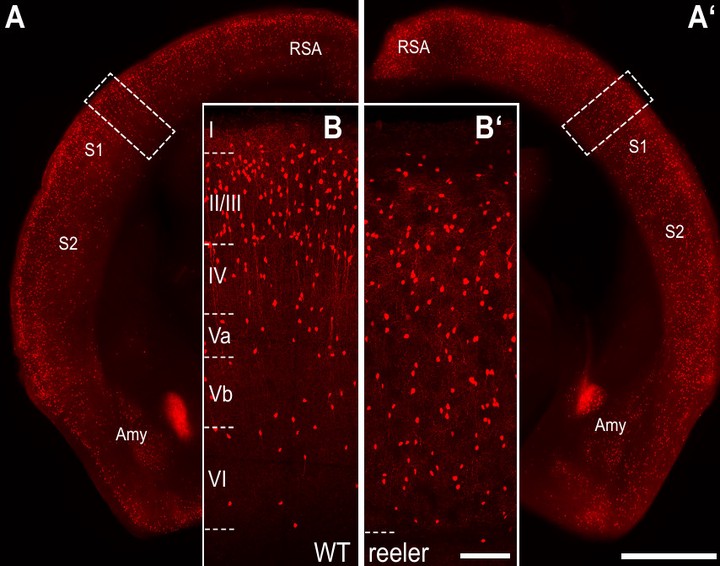 The neocortex is composed of layers. Whether layers constitute an essential framework for the formation of functional circuits is not well understood. We investigated the brain-wide input connectivity of vasoactive intestinal polypeptide (VIP) expressing neurons in the reeler mouse. This mutant is characterized by a migration deficit of cortical neurons so that no layers are formed. Still, neurons retain their properties and reeler mice show little cognitive impairment. We focused on VIP neurons because they are known to receive strong long-range inputs and have a typical laminar bias toward upper layers. In reeler, these neurons are more dispersed across the cortex. We mapped the brain-wide inputs of VIP neurons in barrel cortex of wild-type and reeler mice with rabies virus tracing. Innervation by subcortical inputs was not altered in reeler, in contrast to the cortical circuitry. Numbers of long-range ipsilateral cortical inputs were reduced in reeler, while contralateral inputs were strongly increased. Reeler mice had more callosal projection neurons. Hence, the corpus callosum was larger in reeler as shown by structural imaging. We argue that, in the absence of cortical layers, circuits with subcortical structures are maintained but cortical neurons establish a different network that largely preserves cognitive functions.